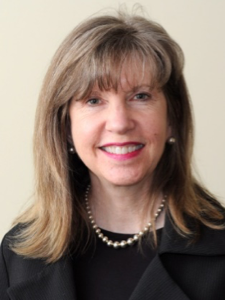 Ms. Fifield, a former journalist, has an extensive background in public policy, politics, government, and public relations.  She was producer of CBS’s award-winning public affairs program, Face the Nation.  She also produced headline programming at other major American television networks, including 20/20 and World News Tonight at ABC News and Nightly News for NBC.  She was a producer for Charlie Rose at Nightwatch with Charlie Rose at CBS News before she went to Face the Nation.  Following network assignments in Washington, D.C., Manhattan, and Houston, Ms. Fifield spent three years in Rome.  She has extensive working relationships with broadcast and print journalists and commentators locally and nationally.

Ms. Fifield began her career as Massachusetts press secretary for presidential candidate George McGovern.  She subsequently moved into the public sector as press secretary for Governor Michael Dukakis before returning to politics as an assistant press secretary to presidential candidate Jimmy Carter.  Following several years of public and political service, Ms. Fifield was hired by Roone Arledge as Director of Public Relations for the re-vamped ABC News.  Ms. Fifield was Director of Government and External Affairs for Boston’s Artery Business Committee—an organization of Boston’s top 100 CEOs who supported the completion of the $15.6 billion “Big Dig,” the largest public works project in the U.S.—for several years prior to joining ML Strategies, the public policy subsidiary of Mintz, Levin, Cohn, Ferris, Glovsky and Popeo, P.C., where she developed and managed crisis communications strategies for that firm’s clients.  She formed Mary Fifield Associates, a 20-person strategic communications firm, in 1995.

In addition to her work with Health Resources in Action, Ms. Fifield is the recent past president of the Massachusetts Women’s Political Caucus, and a current member of the board of the ACLU of Massachusetts.