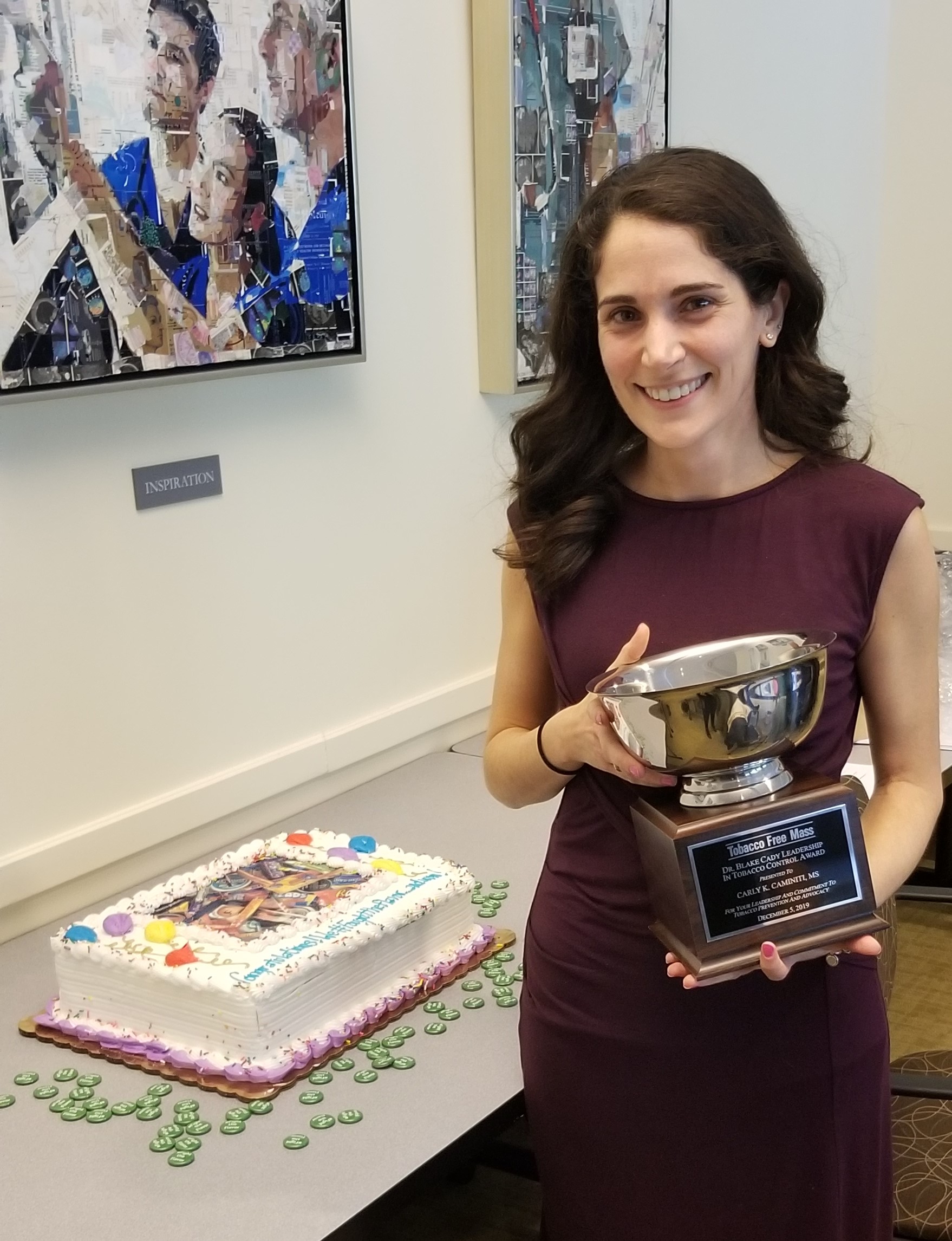 In late 2019, HRiA’s Carly Caminiti received a prestigious award in honor of her youth advocacy work for tobacco control. We asked Kira Jamieson, one of the many talented young people that Carly has worked with over the years, to interview her for this blog. Kira joined The 84 in 2019 and has been a leader of her local coalition, Safe Harbor Cohasset, for several years.

On December 5th, 2019, Tobacco Free Mass honored Carly Caminiti, Associate Director of The 84 Movement, with the Blake Cady Award. The Blake Cady Award is an award given to an individual who has dedicated themselves to preventing tobacco and nicotine addiction. Those who receive this award are recognized for their contribution in helping tobacco control move forward in Massachusetts. As a member of The 84 since this past summer, I interviewed Carly to learn more about who she is and what this award means to her.

The 84 is a statewide movement of youth fighting tobacco in Massachusetts. The 84 represents the 84% of Massachusetts youth who did NOT smoke when the movement began. Now, 93% of youth do NOT smoke. Youth groups in high school, middle school, or a community organization who want to fight against the tobacco and vaping industries can sign up to become an 84 Chapter and be a part of the movement.

Carly began working on tobacco issues when she joined a program like The 84 in high school. This program became an outlet for her to create change and, though she did not know it at the time, she seemed to have found her calling at the age of 14. Carly has worked as project manager for The 84 since 2013 and works closely with youth members of The 84 like me. She loves The 84 staff and statewide leadership team (SLT) both professionally and personally, and works to equitably give opportunities to youth. Carly understands that this is collective movement, and the youth deserve so much credit.

Since I’ve known Carly, I’ve found her to be a genuine individual who is dedicated to her job and passionate about youth’s role in tobacco prevention. She has taken the time to get to know each member of the SLT personally and treats us as if we are colleagues rather than kids. In fact, upon receiving the much-deserved Blake Cady award, she stated that the award should really be given to The 84 youth.

For Carly, the recent fight to remove menthol flavor from stores has been the most important battle of her career. “This legislation is as much of a public health issue as it is a racial justice issue,” she said, emphasizing the unfair marketing of menthol in communities of color. “The hardest part of my job is knowing that we are fighting a multi-billion dollar industry that explicitly and purposely targets people of color with products that are known to kill. The tobacco and vaping industries have used historically racist practices to hook entire groups of people on their products. I think only the power of young people can combat something so monstrous.”  Her efforts to pass the legislation have been extremely impactful, as Massachusetts Governor Charlie Baker signed the legislation into law in November 2019.

Carly’s vision for the future is to continue to work on policies that work to reduce health disparities caused by racism. “There are many other states that need to strengthen their tobacco policies,” she said, “I’d love to help them in their process–and of course, encourage them to work hand-in-hand with young people.”