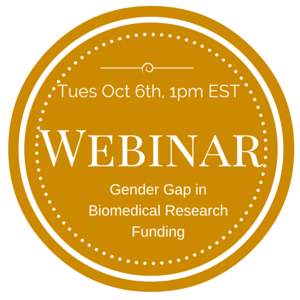 A study by Health Resources in Action’s Medical Foundation published today in the Journal of the American Medical Association (JAMA) finds that women received significantly less financial support from biomedical research institutions than men early in their careers.

The study, focused on a group of 219 applicants for early-career grant funding, reports that employers gave newly hired men researchers a median of $889,000 to purchase equipment and set up their labs, compared to $350,000 for women scientists starting out at an institution. The difference was even more striking among applicants holding Ph.D.s – $936,000 in funding for men versus $348,000 for women. Forty percent of men received over $1,000,000 to launch their careers, compared to only 12 percent of women.

“We had asked our applicants to list the funding and other support they received from the hospitals and laboratories where they worked,” Dr. Sege said. “As we reviewed their answers, we were startled to see a consistent gap in the amount of support provided to men and women with the same credentials – even from within the same institutions.”

The study notes that women are underrepresented at the top levels of biomedical research, comprising only 30 percent of funded investigators, according to the National Institutes of Health. Dr. Sege believes that the previously unexamined gender differences in early-career institutional support may be a contributing factor.

“The work done by Dr. Sege and his team raises concerns about some of the causes of gender inequality in the medical research workforce,” said Ray Considine, President and CEO of HRiA. “We hope this work serves as a foundation for additional exploration and research, and ultimately leads to changes in eliminating barriers that limit opportunities for everyone – a key tenet of our mission.”

Dr. Sege’s research team included Linley Nykiel-Bub, Grants Associate at the Medical Foundation, and Sabrina Selk, Senior Analyst at National Institute for Children’s Health Quality (NICHQ) in Boston. They noted that further study is needed to explore whether the gender differences are representative of all early-career scientists, as the data reported in the JAMA study covered institutions in New England.

“This first look suggests the need for systematic study of gender differences in institutional support and the relationship to career trajectories,” Dr. Sege and his research team concluded.